Coronavirus: Up to 70% of Germany could become infected – Merkel 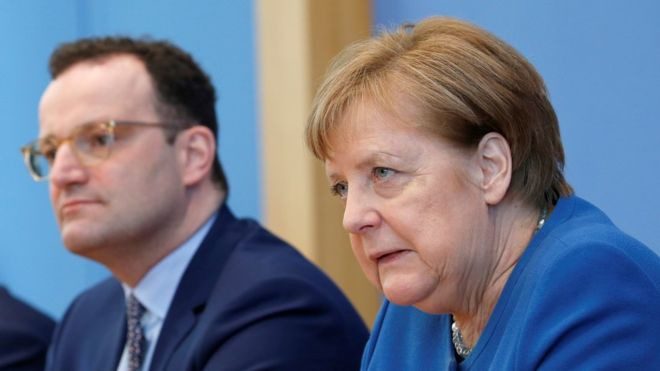 German Chancellor Angela Merkel has warned that up to 70% of the country’s population – some 58 million people – could contract the coronavirus.

Mrs Merkel made the stark prediction at a news conference on Wednesday alongside Health Minister Jens Spahn.

She said since there was no known cure, the focus would fall on slowing the spread of the virus. “It’s about winning time,” she explained.

Her remarks came as Italy entered its second day of a national lockdown.

Italian Prime Minister Giuseppe Conte announced the closure of schools, gyms, museums, nightclubs and other venues across the country, which on Wednesday passed 10,000 confirmed infections.

New York’s governor announced that troops would be sent into New Rochelle, in an attempt to contain an outbreak of the virus, as the total number of US cases passed 1,000 on Wednesday.

A one-mile (1.6km) containment zone was in force around the town north of Manhattan. Some individuals have been quarantined.

Music festivals and other major events in the US, including Coachella festival in California, have been canceled or postponed.

In Italy, which has seen a steep rise in cases, the prime minister pledged 25bn euros ($22bn) to tackle the outbreak – up from the 7.5bn euros announced last week.

Thousands of flights have been canceled worldwide as airlines struggle to cope with a slump in demand.

A UK health minister, Nadine Dorries, said she had tested positive for coronavirus and was self-isolating at home.

Several countries – including Sweden and Bulgaria – have recorded their first deaths, while the number of confirmed cases in Qatar jumped from 24 to 262.

China – where the virus was first detected – has seen a total of 80,754 confirmed cases and 3,136 deaths. But it recorded its lowest number of new infections, just 19, on Tuesday.

Germany confirmed its third coronavirus-related death on Wednesday, in the badly affected district of Heinsberg in the western state of North Rhine-Westphalia.

The first fatality was an 89-year-old woman who died in the town of Essen, the second a 78-year-old man with pre-existing health conditions who died in Heinsberg.

Germany has so far reported 1,296 cases of the virus, according to figures released by the Robert Koch Institute (RKI) for disease control late on Tuesday. The RKI says the virus poses a “moderate” risk to the German public.

Lothar Wieler, the president of the RKI, said the body did not believe there was a significant number of undetected cases in the country.

Speaking alongside Mr Wieler at a press conference – her first public address on the outbreak – Chancellor Merkel warned that border closures would not be enough to prevent the spread of the virus. She ruled out following Austria’s lead in banning visitors from Italy.

“This is a test for our solidarity, our common sense and care for each other. And I hope we pass the test,” she said.

Mrs Merkel also said she was open to scrapping Germany’s “black zero” rule to allow new government borrowing. She said it was “an extraordinary situation” and that ending the outbreak came first.

However other German health experts say it is unlikely that two-thirds of Germans will end up getting the coronavirus.

Virologist Alexander Kekulé, a former federal government advisor on disease control, told German media that in the worst case scenario a maximum of 40,000 people in the country would die. He said this estimation was based on the number of cases in China, where the rate of new infections is slowing.

He had earlier said that the German government missed opportunities to contain the outbreak further by shutting schools and cancelling events.

Wednesday also saw Berlin city authorities ban all events with more than 1,000 participants until the end of the Easter holidays.

“The coronavirus continues to spread. In such a phase, public life must be restricted,” said the city’s Health Minister, Dilek Kalayci. “The spread of the coronavirus can be slowed down by reducing major events. At the beginning of an epidemic, such a restriction is important.”