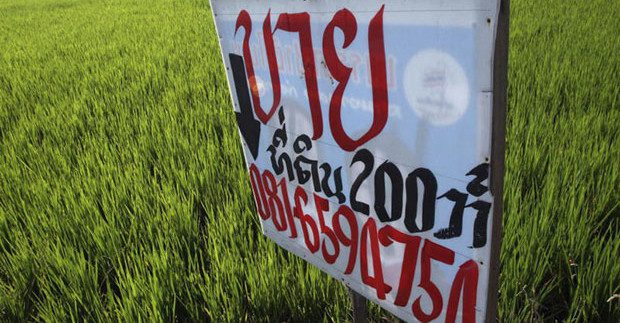 Amending the law to allow median prices based on current appraisal prices to be used for the local development tax could be an alternative to generate massive tax income instead of pushing the controversial land and buildings tax, says a source familiar with the subject.

The strategy could help revenue from the local development tax surge by 100 times to 100 billion baht, said the source.

The local development tax charges are based on land prices appraised between 1978 and 1981. A Fiscal Policy Office (FPO) study found a big difference between the prices of land appraised during that period and those evaluated during 2004-07, from four to more than 4,000 times.

Given that the local development tax is regressive, based on outdated appraisal prices and has many waivers, the Finance Ministry pitched the idea of the land and buildings tax bill replacing a revamped local development tax and a house and land tax in order to raise revenue for local administrators, alleviating the government’s fiscal burden in supporting them.

The local development tax charges 0.5% for median land prices worth less than 30,000 baht but only 0.2% for those worth more than 30,000. Moreover, landlords who own land plots of up to five rai, depending on the location, are tax-exempt. Some 90% of Thais hold less than one rai of land.

The house and land tax, which charges 12.5% of annual rental payments, is blamed for the tax disparity as rental appraisal depends on related state officials’ judgements. Some landlords also pass on the tax burden to tenants. The tax contributes 23 billion baht a year to the government’s revenue.

However, the bill has been shelved for months following public outcry for fear of a higher financial burden because of the new tax.

The source said the market value of land plots has soared on average over 300 times the past three decades.

One option is to exempt the value of buildings from the land and buildings tax bill to lower the burden on home and building owners, as only land would be levied, noted the FPO study.

The source said the land value averaged 70% of the price, so taxing it would be feasible.